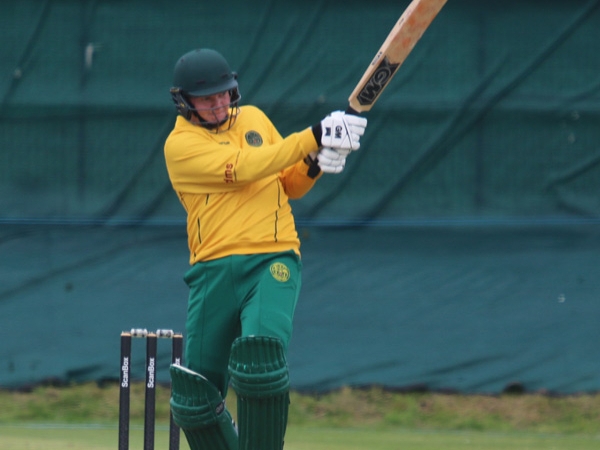 Just six days after facing off in the LVS Twenty20 Cup first round, North Down and Instonians will meet each other once again tomorrow, this time in the Robinson Services Cup.

North Down came out on the winning side at The Green last Sunday to book a semi-final trip to Waringstown on August 9.

A third-wicket partnership of 71 between Ruhan Pretorius (58*) and Peter Eakin (41) helped the home side chase down their target of 128 with an over to spare after Shane Getkate (54) had scored a first-innings half-century.

It was the perfect way for the Comber men to bounce back from a disappointing defeat to Waringstown the previous day, where they went down by six-runs despite needing 16 from as many deliveries.

Another win would leave them in a good position in the league and captain Alistair Shields doesn’t have many complaints about how his side have started the season.

“The thing that I spoke about at the start of the season was winning the key moments in games,” he said.

“The only five overs that we have switched off with bat or ball was the last five overs of our chase against Waringstown and that cost us.

“Those are the big moments that if you win those you win matches and in turn trophies. That’s the challenge that I have gave to our guys.

“I thought we had Waringstown dead and buried to be honest at 80/1. I don’t think it’s a game that we should have lost but we did so there are learnings we can take from that.

“On the whole, I think we have done well.

“Our bowlers have been excellent so far. Carl Robinson has bowled really well and our seamers have backed him up.

“We’ve played on a couple of wicket that have taken spin but we’ve adapted quickly to the conditions.

“It’s pleasing to see Ruhan in the runs on Sunday, (Aditya) Adey started really well, I’ve got a couple of forties and Pete came to the party last weekend so there isn’t a lot to complain about.”

Adey started life with North Down well, hitting a half-century against Carrickfergus in an opening day eight-wicket victory after a move from Muckamore.

He has also played an important role with the ball, bowling nine overs across three games and Shields is pleased with how he has settled in.

“We always thought he was going to be a good addition with bat, ball and in the field,” he added.

“He’s a bit of a livewire in the field being a good athlete and has a good arm. He has bowled pretty well. We have a batch of bowlers that he compliments.

“We have strength in depth there and hopefully in the next couple of weeks we will have extra strength with Stirlo slotting in so there are places up for grabs.

“I think Adey was disappointed with the shot he played last week but he has another opportunity tomorrow. I back him to bat at the top of the order and he has delivered so far.”

Another player that has started the season strongly is leg-spinner Carl Robinson, who has returned figures of 12-2-40-4 in the opening three matches.

He has been involved in the series of Northern Knights practice games, taking 1/23 off four overs in the final match on Friday.

“I picked him as our one to watch at the start of the season,” said Shields.

“I think T20 suits him. Leg-spinners have traditionally gone pretty well in T20 competitions around the world.

“Carl has bowled really well. He has done work over the winter, making some slight changes to his action and looks to me to be bowling slightly quicker.

“He is certainly reaping the rewards at the minute so long may it continue.

“Carl is very much a confidence bowler and if it’ll be great if he can keep riding that crest of a wave. I’m delighted with how he is playing.”

Two North Down players that haven’t actually got to make an appearance for the club this season so far are Craig Young and Paul Stirling, who both played for Ireland in the opening ODI of a three-game series against England in Southampton yesterday.

Stirling only managed two before he was caught off the bowling of David Willey but Young picked up the wickets of Jason Roy and James Vince.

With the final game being played on Tuesday, the pair could be back in time for a trip to Woodvale and that semi-final against Waringstown.

“I caught up on the highlights and they were a couple of good scalps for him,” added Shields.

“Someone like Youngy and Stirlo when he’s available will add serious quality to our team and that’s something for us to look forward to.

“The most important game is tomorrow and if we can get a win to go two from three in the league we put ourselves in a good position to welcome those guys back.

“We are looking forward to having them back and hopefully they go well in the next couple of games.”

It isn’t often that you play the same team in your very next outing and that offers some unique challenges to both sides.

Shields is looking for his men to step up and follow last weekend’s success with another at the same venue.

“We had a similar situation last year where we played Inst in the Challenge Cup and very soon after in the league,” he said.

“Dismissals may be in the back of players’ minds tomorrow with certain opposition batsmen or bowlers that went well last week or maybe some that didn’t go as well.

“Last week means nothing if we don’t perform tomorrow so we will be looking to follow that win up with a strong performance.”