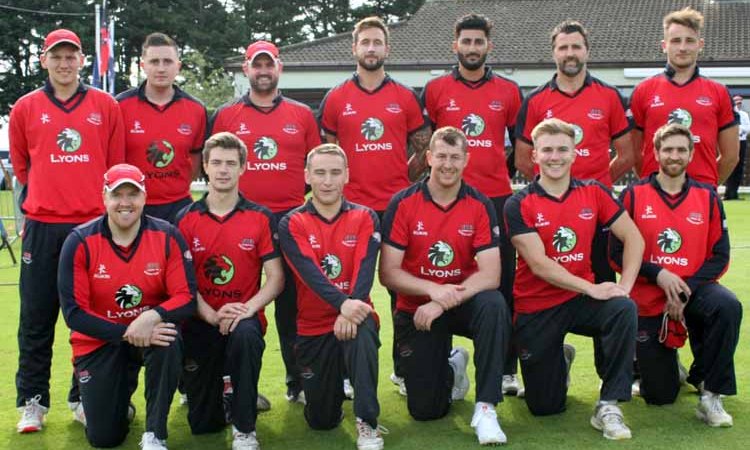 Waringstown captain Lee Nelson is hoping two victories over the weekend will have set the platform for his side to go on and achieve even more success this season.

After an opening day loss to Instonians, the Villagers got up and running in the Robinson Services Cup with a six-run win over North Down on Saturday before following it up with LVS Twenty20 Cup progression against CSNI.

James Hall (48) was the main contributor as Waringstown set North Down a target of 119 and it looked like the visitors were set for victory when needing 16 from as many deliveries.

A superb 19th over from Kyle McCallan left the Comber side requiring 11 off the final over, where James Mitchell held his nerve to bowl an almost perfect set of six balls.

Despite sitting in a precarious position after an 81-run second-wicket partnership between Ruhan Pretorius and Alistair Shields, Nelson was always confident his side were well in the game.

“When you lose your first game, you’re just dying to get those first points on the board,” he said.

“It was tough because we were playing a good side in North Down but to be able to react in the way we did – I was delighted with it.

“I felt we were always in it because it was always nip and tuck with where they needed to be with D/L and that’s usually a good indicator that you’re never out of it if it’s a run here or there.

“We kept chipping away at wickets and as soon as we broke the partnership of Ruhan and Shields, we were getting a wicket every couple of overs which was keeping us in it all the time.

“In T20, the closer you bring it to the last few overs, anything can happen and we held our nerve well.

“At stages at the end of last year, we were falling short in those games. We fell short in the last ball of the first game against Instonians so showing character like that, especially someone so young like James Mitchell being able to step up and bowl the last over like that – I thought he was superb.”

Waringstown bowled 13 overs of spin on Saturday, including four from the returning Gary Kidd who missed the defeat to Instonians.

They are accompanied by Mitchell and Phil Eaglestone, who picked up figures of 5-16 against CSNI in the Twenty20 Cup victory.

Nelson was full of praise for his spinning unit and believes 44-year-old McCallan is still the very best off-spinner in the local game.

“We missed Gaz so much against Instonians that I can’t even describe,” he added.

“We really missed his overs in the middle because he gives you the option to take the ball away from the right-handed batsmen and that’s difficult to score off, especially when you need to go at seven or eight an over.

“To have him back against North Down was a massive plus and he’s a class act.

“I don’t think anyone has taken more wickets than him in the past 10 years so you’re always going to miss him when he doesn’t play. Now he is back, it’s going to be a major boost to us.

“Yes he is in his forties, but he’s probably as fit now as he has been in the past 10 years.

“He has put a lot of work in over the winter on his fitness. Especially in T20, I don’t know how many more years he could go on to play for. He’s still in my opinion the best off-spinner in the country.

“He hasn’t aged in the last six or seven years and still hits that length every time and picks up big wickets. He came on and bowled Ruhan on Saturday and that won us the game.

“It’s hard to describe how important he is.”

Topping has filled the role of number three in the batting order, left by James McCollum who is on Ireland duty, and looked to be striking the ball sweetly across both matches.

Having returned from CSNI ahead of the 2020 campaign, Nelson is impressed with the level that the former Ireland U19 international is playing at.

“His ability with the bat is there for everybody to see,” he said.

“He played a cover drive on the up on Saturday that rocketed to the fence and you just think that’s serious.

“I would have liked him to go on and see the game home on Sunday.

“It’s not always easy for people to go in and score at six or seven an over, so I would like to see him now really kick on and finish games off for us when he has them won.

“That’s something he will work on but in terms of his ability and how he strikes the ball, I think everybody has been impressed.”

Nelson should have Saturday’s star Mitchell available for selection this weekend after an x-ray revealed no broken arm following a blow off the very first ball of the innings on Sunday.

The 23-year-old will play a key role as Waringstown travel to unbeaten Woodvale on Saturday and Nelson is looking his side to gain momentum heading into the rest of the season.

“The season is so short that your momentum is crucial,” he added.

“If you can get on a run here, you can find yourself in a couple of Finals Day’s, so when the season is so short the momentum is so key.

“Hopefully by getting those couple of wins we got it’ll stand us in good stead.”