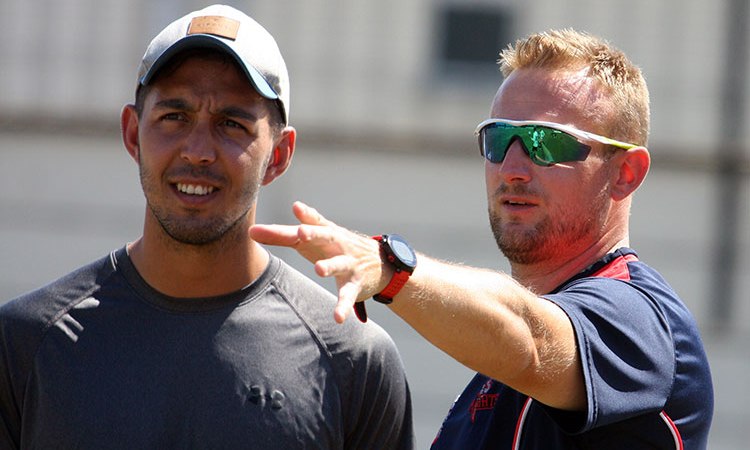 Northern Knights head coach Simon Johnston was impressed with the talent on show at Shaws Bridge yesterday as a 28-man squad kicked off a series of four practice matches.

‘Team A’, captained by Marc Ellison, batted first and scored 158/4 in their 20 overs thanks to 55 from Instonians all-rounder James Hunter while Ellison (25) and John Matchett (23) also contributed.

‘Team B’ captain Shane Getkate (60) led the way for his side and was ably-supported by Morgan Topping (41), but they fell just short of a winning total.

The squad will meet again at the same venue on Friday before another two games next week at Wallace Park.

With a mix of youth and proven quality, Johnston was pleased with how the younger crop handled themselves and it could well lead to him giving even more an opportunity.

“I know what we have in the Union,” he said.

“There are some proper players there and they just need cricket.

“I was a little bit concerned about yesterday because you have Irish internationals like Jacob Mulder and Graeme McCarter and guys who are quality performers like Ruhan (Pretorius) bowling at 15-17 year olds and you’re a little bit wary, but the guys handled themselves fantastically and if anything it’s got me more enthused that it’s the right thing to do.

“I thought to myself we would only play two or three 15-17 year olds that the Irish coaches wanted to see but now I’d be very keen, certainly for the last match, to play a number of people. I really enjoyed it.”

These matches are being used as an opportunity for players to impress and get games under their belt after an extended period away from the middle while Johnston will be planning for the possible return of Inter-Provincial cricket next month.

The likes of captain Gary Wilson, Mark Adair, James McCollum and Paul Stirling will all come back into the fold upon their return from international duty in England.

It isn’t just Johnston that has a keen eye on these fixtures but a range of coaches who are all looking to see who could potentially fit into their respective squads.

“With my Knights head on, if Stirlo isn’t available and has to go to the Blast then I’m looking at a couple of opening batting combinations,” he added.

“I know Pete (Johnston) in the bigger picture is looking at Ireland A stuff – is there a couple of guys that he has missed or hasn’t seen in a while?

“Eagy (Ryan Eagleson) with his U19’s – they have a World Cup qualifier again hopefully next year and he’s looking for people.

“Albert (van der Merwe) is looking at the bigger picture over the next few years and seeing who are the good 15-17 year olds that we can have a look at.

“It has worked really well because we are covering such a big spread. If anything, I would bring more than 28 in because it’s good quality cricket that the guys need.”

Getkate had to deal with the disappointment of being excluded from Ireland’s touring party to England but could hardly have responded in a better way than striking 60 from 46 deliveries at his home ground.

Johnston was full of praise for how he has handled himself and says he is an example to the younger generation on how to reach the highest level.

“Obviously it’s a heavy blow for him to take but his professionalism and attitude since has been phenomenal,” he said.

“He was captain yesterday and the way he conducted himself before and during the game, it showed the young lads that’s what a professional cricketer looks like.

“I can’t say enough about the bloke. He will get his chances again.

“He certainly stepped up yesterday and he is going to play in some of the Dublin games as well, so I would expect him to be showing these younger lads what it takes to be a professional cricketer.”

Getkate’s Instonians team-mate Hunter hit five fours and three sixes on the way to his own half-century.

The 17-year-old also held his nerve in the final over to bowl Instonians to victory at Waringstown on Saturday and Johnston is a big admirer of his ability.

“For whatever reason at club level it just hasn’t clicked, but if anything I would say he looked like the best batsman on show yesterday which is no small feat.

“He came in on a sticky pitch at the start and struck the ball beautifully. It’s testament to the club with what they are doing with him and he’s coming on leaps and bounds.

“He’s someone who if he gets another score, he will certainly come into our thinking and that’s fantastic news.”

In the remaining three games, Johnston is just looking to see more of the same from everyone who is involved.

“I was so happy with yesterday so I’m looking for more of the same,” he said.

“It was a competitive game and the guys really went at each other hammer and tongs, which I wanted to see.

“The senior guys really stepped up and led. A few of the younger lads put up their hands and that’s all you can ask for.

“You have the quality of Graeme McCarter, who is bowling as well as he ever has, and Jacob Mulder who we know is a quality performer, but then the likes of young (Ben) Snell from Waringstown, who is only 16, was superb.

“It was exciting to see so more of the same would be perfect.”