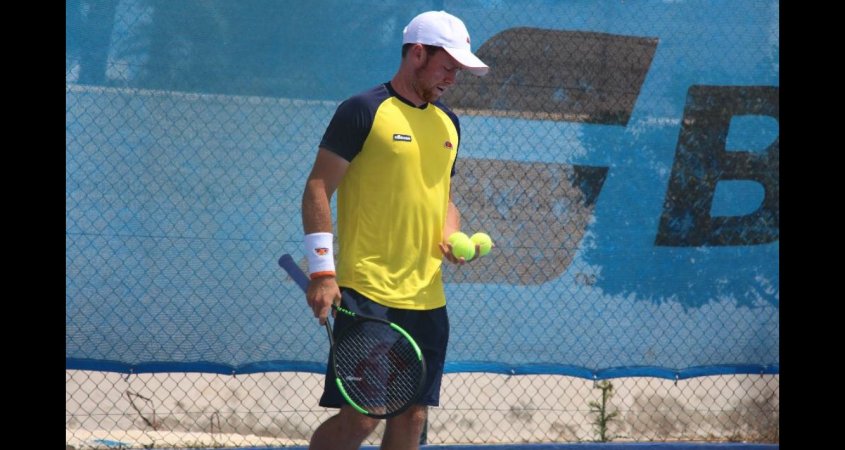 Northern Ireland’s highest ranked tennis player has made the decision to step away from the professional game in order to pursue a coaching career.

Peter Bothwell, who reached a career-high singles ranking of 602 last summer, became the first Ulsterman to make a significant breakthrough onto the ATP circuit when he entered the rankings in July 2014.

The 24-year-old won his first professional singles crown at the Irish Open in 2018 and also went on to pick up eight doubles titles before calling time on his career this week.

Although not an easy decision for the Hillsborough native to make, it is one that he is at peace with.

“I made the decision about a week ago and then sat on it for three or four days just to make sure that I was comfortable and making the right decision,” he said.

“It was such a big decision so I didn’t want to rush it and wanted to be true to myself and make sure that it sat right with myself.

“Being able to go out and coach at the minute, I then realised that it was time. I think it’s the right decision.

“It wasn’t an easy one because it’s something that I’ve known and for seven or eight years it has been all that my life has been.

“It’s a massive shift but I definitely think it’s the right call so I’m committed to that.”

Bothwell spent the majority of his career playing on the third-tier Futures level while based at the SotoTennis Academy in Sotogrande, Spain.

While many have become accustomed to the glitz and glamour that Wimbledon provides and superstars like Roger Federer and Rafael Nadal, Bothwell was one of hundreds of players who are fighting to make their way to those illustrious stages.

With the nature of the tennis tour and a tournament almost every single week, players rarely get the opportunity to reflect and take stock of where their career is at and what they are looking to achieve from it.

The coronavirus pandemic has put the sport on hold and it has brought that chance for Bothwell to evaluate everything, giving him clarity to make such a big decision.

“I’ve probably thought about it three or four times over my career.

“You always question yourself if you’re good enough. That was just doubt in my head and I never really seriously considered it.

“Life always felt like it was going so quickly and I never really had time to just sit down and reflect.

“It was a massive reflection and perspective that helped me made the decision.”

Those around Bothwell and the people he confides in were more than confident that he had what it took to progress even further in the rankings, but it came down to the question of whether the sacrifice was going to be worth it.

“My coach fully believes that I could go higher in the rankings.

“I do believe I probably could but is it really going to make a massive difference if I finish 400th in the world compared to 600th?

“I don’t have any funding and the support isn’t there from Tennis Ireland so it’s obviously very difficult.

“With this time as well, I have always relied on some people to give me support from my local club at Downshire, but with the current situation that isn’t going to happen because that’s way too difficult.

“Just loads of different things and also a sense of responsibility as well.

“My parents had sacrificed so much and I felt it was time to help them and pay them back. Loads of different things like that helped me form my decision.”

While retiring from the professional game, Bothwell won’t be hanging his racket up completely and still plans to play local competitions when he can.

He will now be putting all of his energy into coaching and will be hoping he can find the player to build on the success he has achieved throughout his own career.

“I still might compete in local competitions in Ireland and things like that because I’m such a competitive person.

“I’m not leaving the sport and for me that is huge. My whole life is about sport and I would be lost without it.

“I’m going to get stuck into coaching and I really enjoy that. I always did a bit when I was in Spain to help me pay the fees there and always enjoyed it.

“My mum was a coach and my granda was a coach, so it’s something that comes naturally to me and I enjoy helping people.

“No one had ever had an ATP ranking from Northern Ireland so I was the first one to do it and then my brother followed and we’ve had one more guy, Jordan McKeown, since.

“I’d get the same satisfaction in helping someone from here go higher than me and make it to a Grand Slam or reach the top 100.

“For me, that would give me as much satisfaction as doing it myself.”

Bothwell retires as a trailblazer and a source of motivation for the next generations of Northern Irish tennis stars that they too can reach the professional ranks.

He has laid the foundations and created a path for those youngsters to believe it can be a real possibility for someone from these parts to make it, and he looks back of his career with immense pride.

“I think I did really well.

“I didn’t have anyone to look up to from here that had done it before so I think that probably held me back a little bit.

“When I got to a certain point I got comfortable at that level instead of believing in myself more and to push on a bit more.

“Leading Ireland in Davis Cup was incredible for a couple of years, winning the Irish Open and becoming the first Irish player to win it since 2012 and there’s just a lot of proud moments.

“Looking back, I did make a couple of bad mistakes and you’ve to learn from those as well.

“I was a bit unlucky that I didn’t get a few more opportunities but I think I maximised those that I was given and I was true to myself. I put in the work day in, day out.

“If you looked at me when I was 16/17, yes I had played a few junior international tournaments and was ranked high in Ireland, but if you’d asked someone then if I would win s $25K Futures event, eight doubles titles and lead Ireland in Davis Cup, nobody would have said yes.

“I definitely feel I had a good career and I’m proud of it.”